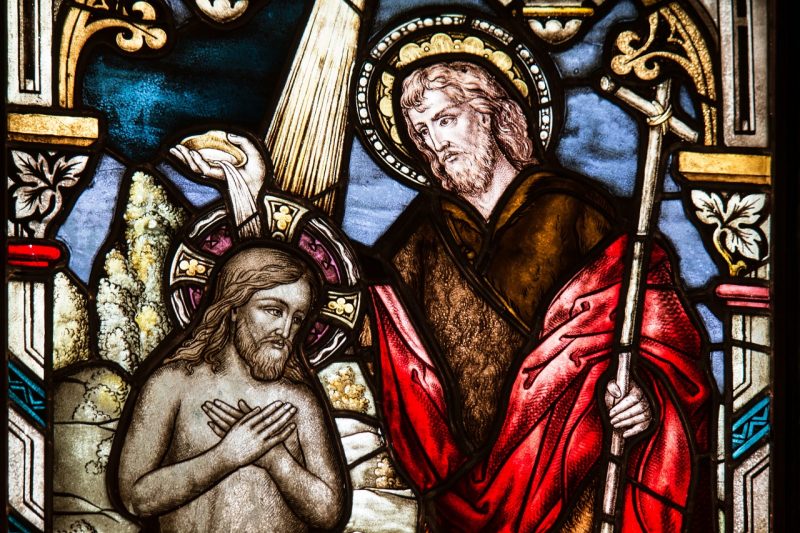 Sin is one of those uncomfortable subjects that brings out the judgement in even the best of us, it makes your eyes glaze over, or if you are like me it makes you look in the rearview mirror for the flashing blue lights that let you know for certain you have run straight through the stop sign. Sin, while most Christians think it’s all the bad we have ever done, or going to do, is really a lot more complex than the naughty list Santa reads. What is sin? If you Google it you’ll find 2 million, 2 hundred twenty thousand results. I don’t know if there is that much sinning going on in the world or if we are obsessed with the subject of sin, but what I can tell you is that more often than not, sin is simply what’s keeping you from God.

As Christians, baptism is one of the ways we address our separation from God by acknowledging that sin is part of the human condition, and that you and I collectively need God’s help. John the baptizer, as he came to be known by the Qumran community down by the Dead Sea, met a few folks who were struggling with their own blue lights and the effects of sin and he had a solution that worked so well that it drew attention from the whole Judean religious community: baptism by water. What John started down by the Jordan River we still do today although I expect only a few of us have ever been to the Jordan River.

John, who was the elder cousin of Jesus by about six months had been on the road a while and had already warmed up his sales pitch as notorious as he was throughout the wilderness of Judea. Filled with a fire that can only be described as from God, John knew there were not enough pigeons, goats, and lambs to make right some of the burdens whispered in his ear. Only the river Jordan flowing over those sore wounded souls could wash away their troubles. Like many of us more than just a few in those days were looking in their rear-view mirrors anticipating imminent judgement.

While John radically departed from the religious norms of animal sacrifices and washed the weary souls that came to him in the running water of the Jordan he professed the coming of a new kingdom. The Pharisees and Sadducees must have thought John lost the rule book on temple practices while eating all those locusts and wild honey in the wilderness.

John and Jesus had more than a few things in common besides wagging their fearless tongues in public. Both John and Jesus were conceived by the mere utterance of the Angel Gabriel, God’s messenger; one to an aged woman past optimum child bearing age; and the other to a young woman nearly too young to know much about the birds and the bees much less signing up for Lamaze classes.

Depending on where you are from knowing something of your heritage is usually important.

In the northeast where my family is from everyone wants to know where you went to college; however, in the south where my husband’s family are from everyone wants to know who your people are. In ancient Israel everyone wanted to know who John’s people were: they were direct lineage to the nobility of Aaron, the great high priests, the ones who directed how many goats, sheep, and doves were sacrificed, the ones closest to God. I imagine John was quite the stir in his hair cloak, rather than the purple robes of the great high priests, and his irregular practices calling for repentance and baptizing people in the river for forgiveness of their misdeeds was against all religious protocols. The stir didn’t stop with John’s wild camel hair garment, or his river baptisms, or his urgent call to repentance, the stir didn’t stop because John wasn’t the only one causing a stir.

Jesus tracked John down after a twenty hour hike by way the crow flies all the way from Galilee to the Jordan River. If you are paying close attention you can see what Matthew’s script is saying between the lines. John, who had already turned the law on its head was eager to shout to the heavens about the one to come and his cousin, Jesus, whose fire was brighter than any he’d ever seen shows up. Jesus, in line all the way from David, whose royal lineage promises a united monarchy of Israel, the kingdom yet to come, arrives by the River Jordan to be baptized by John. John, far from any altar in the Temple, protests and reluctantly baptizes the one he recognizes as greater than himself.

Matthew’s account of John and Jesus meeting up at the Jordan River was about more than cathartic bathing; you can see where things came from and where things were headed. You see, as Matthew tells our story with God, it’s all about family: bloodlines, yours and mine, all the way from before ancient Palestine or even the earth’s first gasp of breath. God loved. God loved all that he created, the original blessing. John the Baptizer was the last of the old law, which for the life of God, his beautiful children couldn’t ever fully grasp.

No goat was ever going to suffice for the love God has for us. John, like a breath of fresh air blew the reality of God’s wish that all would repent, forgive, and be forgiven, and fully restored to life, into the people who would listen right by the River Jordan; knowing something even greater than all that he offered was a foot. God was so desperate to right what had been wrong for us for so long that only his Son would do. John the baptizer, baptized the prince of peace, the one who was to come, Jesus. Right then, our heritage, yours and mine, was a lit with the fire of the Holy Spirit descending like a dove, on a head soaking wet from the waters of the Jordan River and God said: “This is my Son, the Beloved, with whom I am well pleased.”

God has taken you by hand and kept you since the beginning of creation. Christians don’t like talking about the subjects of sin, repentance and forgiveness because it is mostly what we see in our own rearview mirrors; it’s the blue lights of fear and guilt that say someone is out to get us, so we are afraid to turn around and look at ourselves closely, where we’ve been and where we’re headed. Fear turns us into stiff necked people who can’t look around. Forgiveness goes both directions, east and west, out from us and in towards us. For most Christians the hardest part of forgiving is when it applies to ourselves; if that were not so I imagine we’d all be jumping into the River Jordan splashing each other until the sun goes down. In baptism we are given to God but what is really important that is never really said out loud during our beautiful baptism services is that God doesn’t give you back. God doesn’t let us go, never has.

Just to make things a little easier God doesn’t want us to forget whose we are and Matthew has shown us again where we’ve been and reminded us through the telling of the story who we are. If anyone asks you who your people are you can tell them what you heard today: the beloved, with whom God is well pleased. Amen.