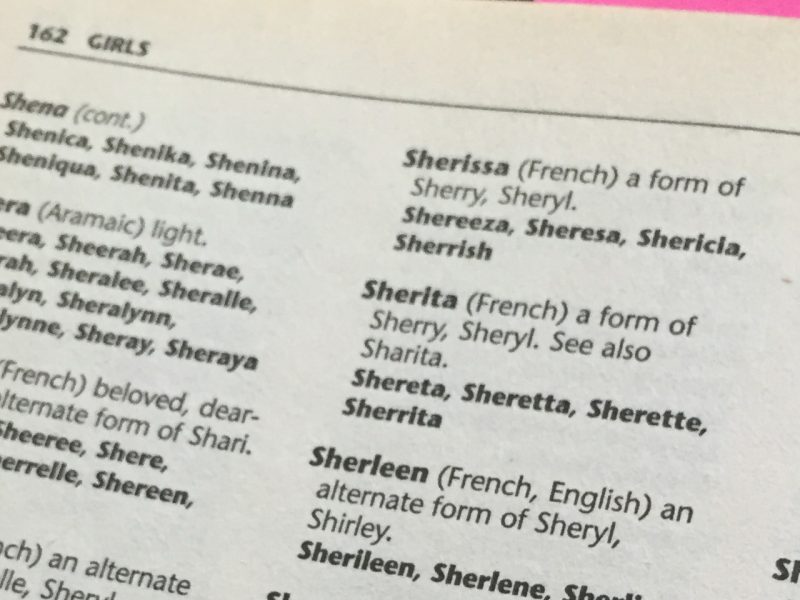 The Holy Name A

The One with the Holy Name

I knew a girl once whose first name was Vivian which isn’t unusual except that it was exactly the same as her last name. I always wondered how she kept her coming and going straight. I can only imagine what it was like to register at the DMV to obtain a driver’s license with a birth certificate like hers. Her name reminded me of the push-me pull-you creature from Doctor Doolittle children’s books whose Unicorn like animal had two heads one at each end. I’m not sure why her parents thought her surname needed to be matched by her given name but perhaps they held it in such high esteem they wanted it to doubly honor their only daughter.

Names mark our place in the hierarchy of family, work, and society. We delight at names sided with titles: Doctor, the Honorable, The Reverend, and even Your Grace. I can only imagine how many times Queen Elizabeth had to try on her name, much like her hats, before it became comfortable if it ever has. I only know that the name queen has lots of connotations and not all of them ones you would want emblazoned on your crown. We equally cringe at names poorly attributed like when a child hears, “wait until your father gets home,” or “what would your mother say?” All I know is that a name has power, and if you have ever been called a name you probably know what I am talking about.

The absence of using someone’s name has power too, it depersonalizes and sometimes even dehumanizes.  You see depersonalization when patients in a hospital are given a patient number or when news reports refer to the victim or the perpetrator by the result of the crime, or in times of war when soldiers are referred to as merely troops. When you hear news reports often it becomes easy to forget every member of a unit has a name, a history, and a family hoping they will return safe and sound. The Vietnam War Memorial Wall lists the names of all those men and women that did not return, each name etched in granite for time immemorial, lest we forget our own humanity. Names have power, and naming someone has power, too, like when you say, “he’s a graduate of Harvard,” or “she’s a product of Appalachia,” either way one is extolled or diminished. Naming a child becomes one of life’s greatest privileges and with it great responsibility: it becomes the first indelible sign of a human being embarking on a journey into humanity. While names are the tags that identify who you are and what others know you by; when your name was chosen for you at birth, placement was then created for you in the ongoing history of the family into which you were born.

Today is when we celebrate the holy name of Jesus and his birth in the church. It’s not the first time you’ve heard the name Jesus. If you are good at counting then you can find the name Jesus in the bible nearly a thousand times depending on which translation you choose. The ancient Israelites probably heard Jesus a lot more than any of us considering the popularity of the name in their day, in fact it was number 6 according to Tal Ilan’s Lexicon of Jewish Names in Late Antiquity, equivalent to David, the 6th most popular name of our day.

Jesus, is from the derivatives, Joshua, or Yeshua in Hebrew which means God Saves, while Christ means, messiah, or the anointed one. In the Old Testament son of God is a title given to the angels, the children of Israel and the kings representing an adoptive kinship, a familiar relationship with God, and those who had that distinction would not necessarily be recognized as having anything more in meaning to the people of Israel in the first century. The common name Jesus was more likely to be aligned in association with the Hasmoneans who once reigned and were a rough and tough sort and would have lent a messianic or revolutionary spirit in the air.

When Mary heard the Angel Gabriel say the name Jesus in that tone of voice she knew something exciting was happening. She saw the shepherds swapping looks over her infant son, and while listening to their take on things about what they heard the angels say, her heart started pounding. As Mary listened to the shepherds chattering on that night every word spoken she savored like fine chocolate on her tongue. There with Joseph and ordinary shepherds, the warm breath of sheep and cattle nearby, Mary held the prince of peace in her arms because of an extraordinary act of love from the one who chose her as a god-bearer in the dark of night.

In the church we name one another in baptism as a sign of our place in Christ’s family. The name you were born with likely follows you the rest of your days and very often other names may appear along the way, too, some desirable, and some you may come to discover cuts through even the toughest of your skin. Most of us remember our name on a good day and some of us may remember our baptism vows, too, the ones that conclude “with God’s help, I will.”

The problem in the church today is that we don’t know what to make of the Holy name. Jesus is spoken so often that it has lost its resonance in our hearing. We come hungry for an encounter with what is Holy but no longer expect to be delighted, amazed, or astonished much less healed. The sad truth is we have so much noise in our lives that the still small voice is hard to hear or encounter in an institution often focused on its survival rather than revival. What’s even more daunting for those of us who are Christian with a large measure of skepticism over anything that reeks of certitude, are the well-meaning Jesus lovers that promote a savior whose sole salvific power comes at the behest of strict obedience, rather than the gift of God’s immeasurable grace living among us in Christ Jesus, God incarnate, God who is with us.

The one who chose Mary, simply a young woman with little else in power beyond a willing spirit, chose you with the same extraordinary act of love. God who came to live as one of us has chosen you and all that is needed is a willing spirit.

Saviour, be born in each of us who raises his face to thy face, not knowing fully who he is or who thou art, knowing only that thy love is beyond his knowing and that no other has the power to make him whole. Come, Lord Jesus, to each who longs for thee even though he has forgotten thy name. Come quickly. Amen.

-Originally published in The Hungering Dark, by Frederick Buechner